The life cycle of the Mason Bee, for the red and blue mason Bee. How they breed and how the larvae and pupa survive till they become an adult bee and the life of the mason bee.

With pictures of the red and blue mason bee. Larger bee below is a orchard bee. Found in Vilcabamba, Loja,Ecuador. 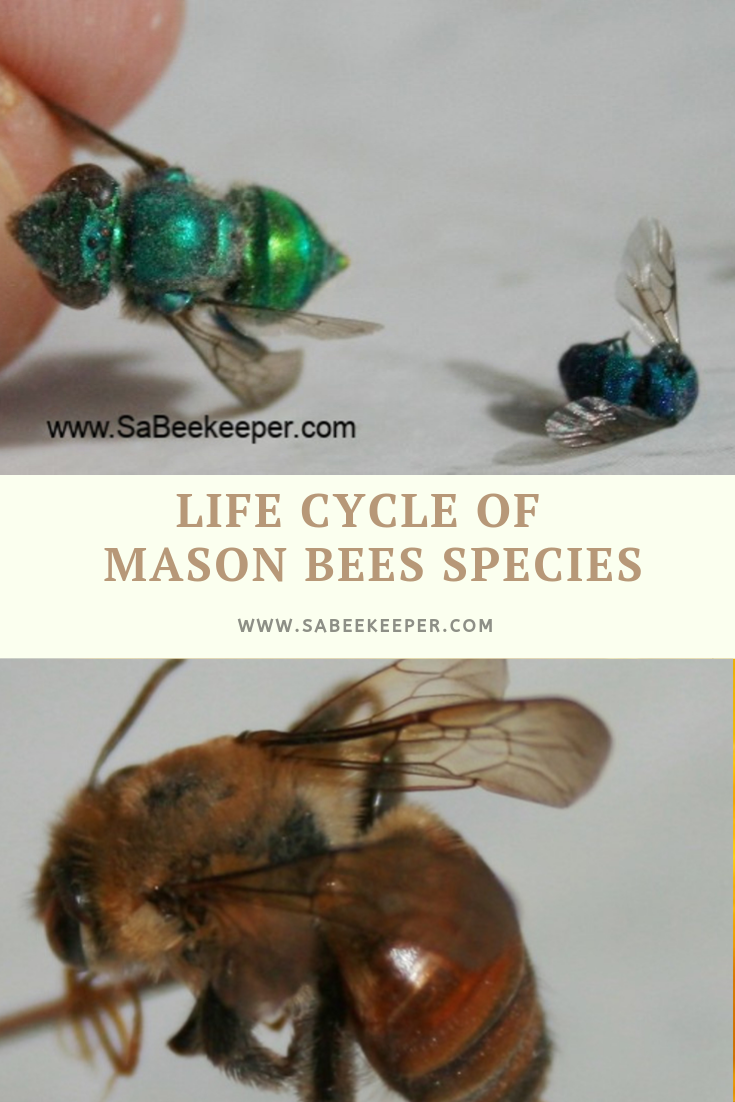 Mason bees are named for their habit of using mud or other “masonry” products in constructing their nests, which are made in naturally occurring paces such as between cracks or in holes in stones or walls, or other small dark cavities.

When available some species use hollow stems like reeds or bamboo or holes in wood made by wood-boring insects. 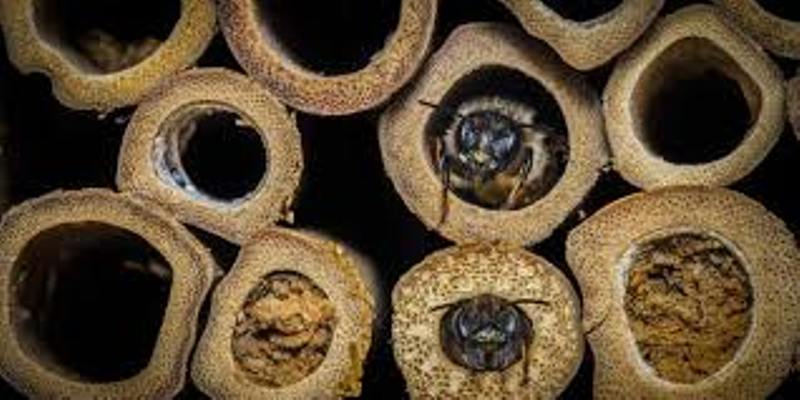 Mason bees (genus Osmia) are a type of native bee that’s quite common throughout most of the U.S. They are usually a little smaller than a honeybee, and typically metallic blue or blue-black in color. They get their name from their habit of nest-building, which is to seal off the cells where they lay their eggs, with a mortar-like application of mud. Although the blue mason bee I found is the same size as the honey bee.

Below; These three mason bees found are a metallic green blue orchard bee and a small metallic blue bee, called a sweat bee, then the normal size blue mason bee.

There are about 140 species of mason bees in North America. All are solitary bees. The males do not have a stinger. The females will only sting if trapped or squeezed. This makes them an ideal neighbor for the home garden, since they pose little to no threat of stinging.

Life Cycle of the mason Bees.

The life cycle of a mason bee consist of pollen-collecting and egg-laying. This will continue for four to six weeks, after which the bee will die.

They begin to pack this food into the far end of their nesting cavity until they decide there’s enough there to feed a young bee.

She begins laying an egg and filling it with lots of pollen and nectar and seals up the cell with a thin mud wall, this is continued until the bee has fill the total hollow and seals it off with a thicker wall of mud. To protect against any predators.

The mason bees prefer to make their nests close together.

Mason bee larvae hatch just a few days after the eggs are laid. They munch away on the food that’s been stored in their cell, which usually lasts them about 10 days. Then the larva spins a cocoon and pupates.

By autumn, the insects look like an adult bee, but they remain inside their cocoons throughout the winter. When the weather warms in the spring, the males break through first and the females emerge several days later.

It is known that the eggs that are destined to be female are always deposited at the back of the nesting chamber, they also get more food, A process that would take about 10 days.

The male bees will emerge first, and are smaller of the bee species. Once the females emerge the male bee will mate with her and then die.

Female mason bees emerge in early spring and immediately begin to forage for pollen and nectar.  Start the cycle all over.

Mason bees are very effective pollinators. Just two or three females can pollinate a mature apple tree. Mason bees will also work in cool or rainy weather when honeybees are more likely to take the day off. But the mason bee is found to be a bit messy as the pollen sticks to its abdomen and falls off, as they do not poses the pollen basket hairs that the honey bee has. Note the picture below of the pollen. 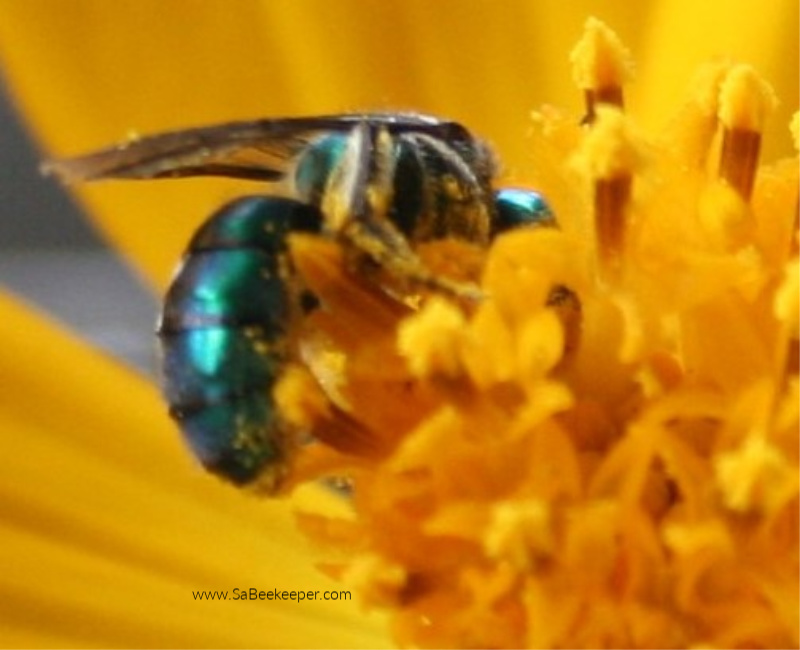 Also view more pictures of the blue bee and learn from them on this page. 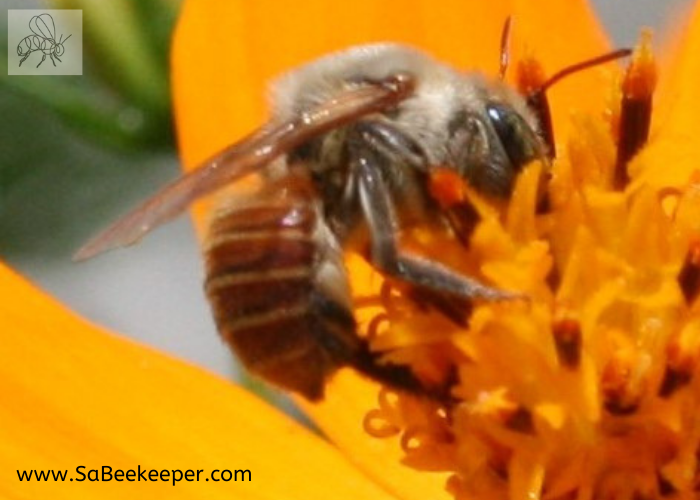 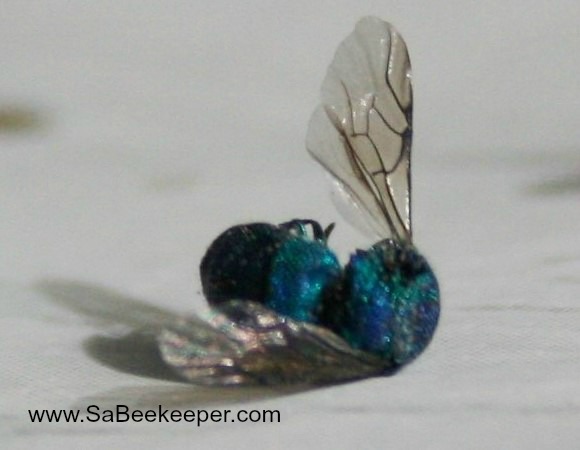 Also a video slide of the blue mason bee on cosmos flowers to view.