The Stingless Honey Bee on this page gives information (Tetragonisca angustula) and photos, which we found in Vilcabamba, Loja, Ecuador. 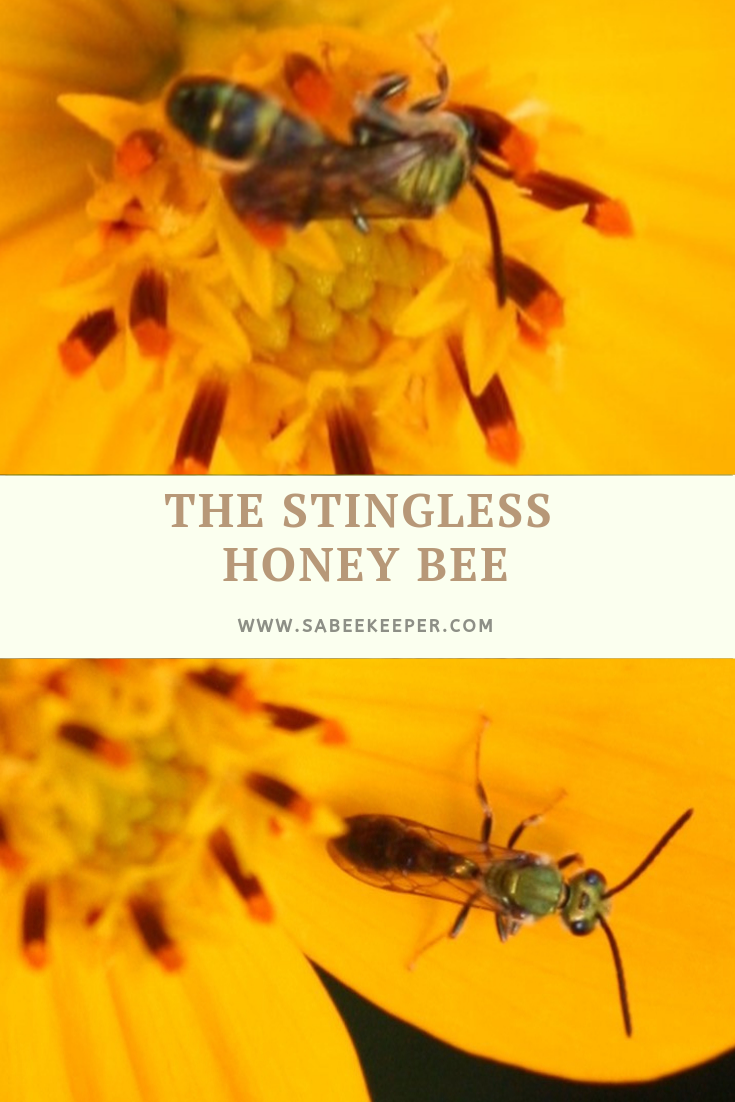 The bee was Found mostly in South America and Australia. But we found it in Ecuador, south america. 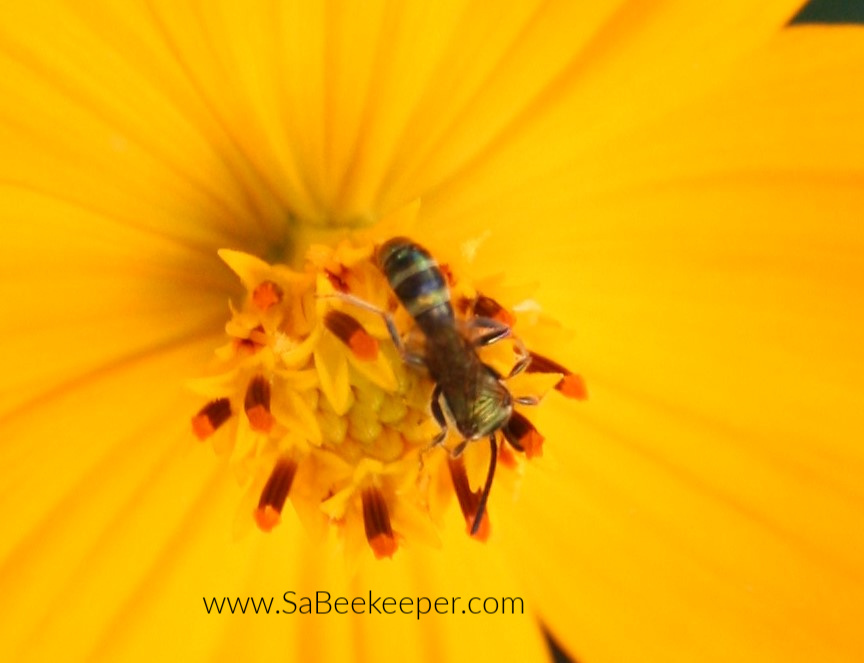 They are a great alternative to the honey bee. Yet they are more attractive to the bee keeper as the do not sting.

They normally have combs in the shape of round sets of flower petals. But may be kept in a beehive box.

They are known to take over a beehive if they can kill or chase a queen bee and swarm from their beehive. 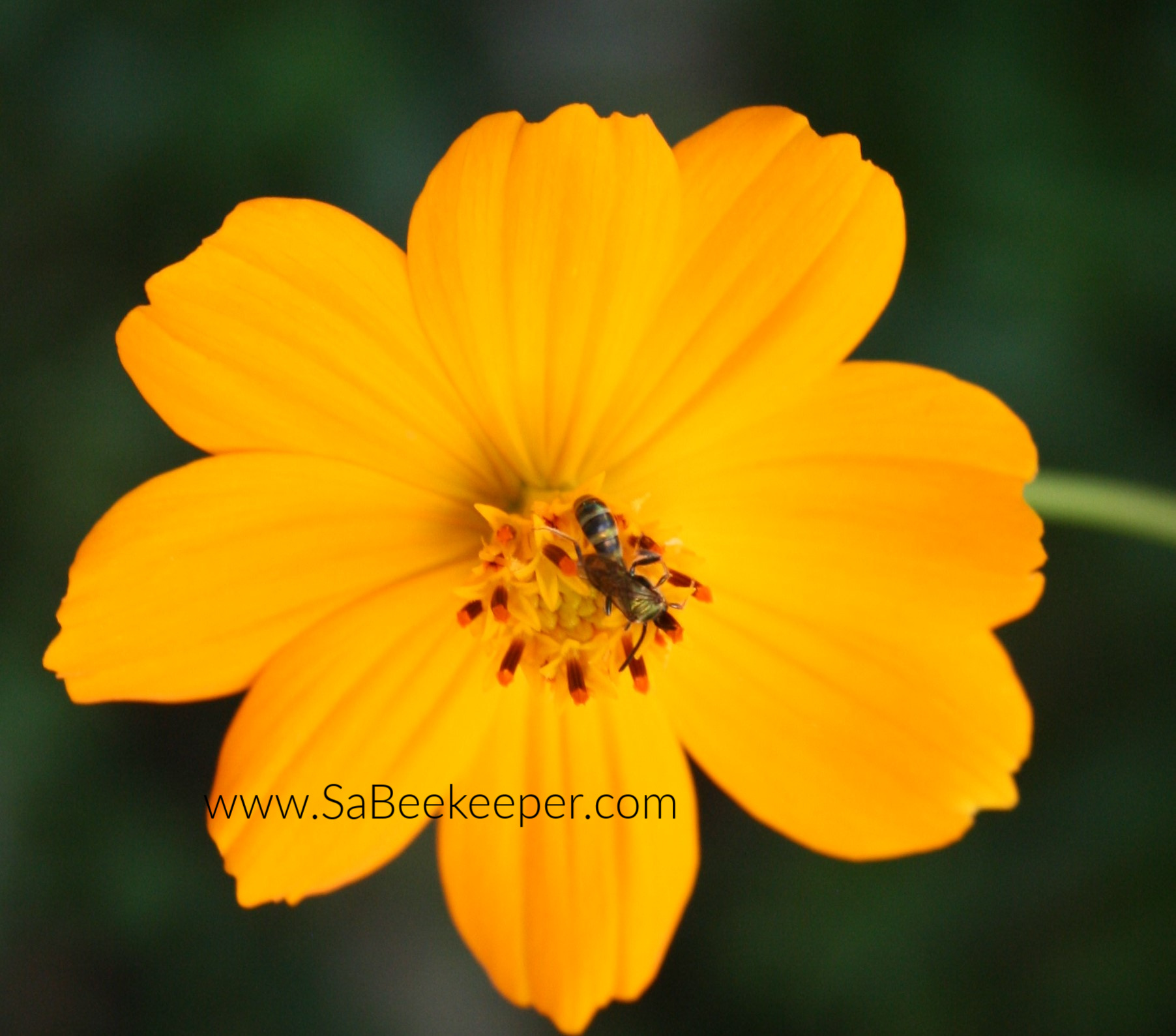 The bee was on the yellow cosmos flowers in the garden in Vilcabamba, Loja,Ecuador. 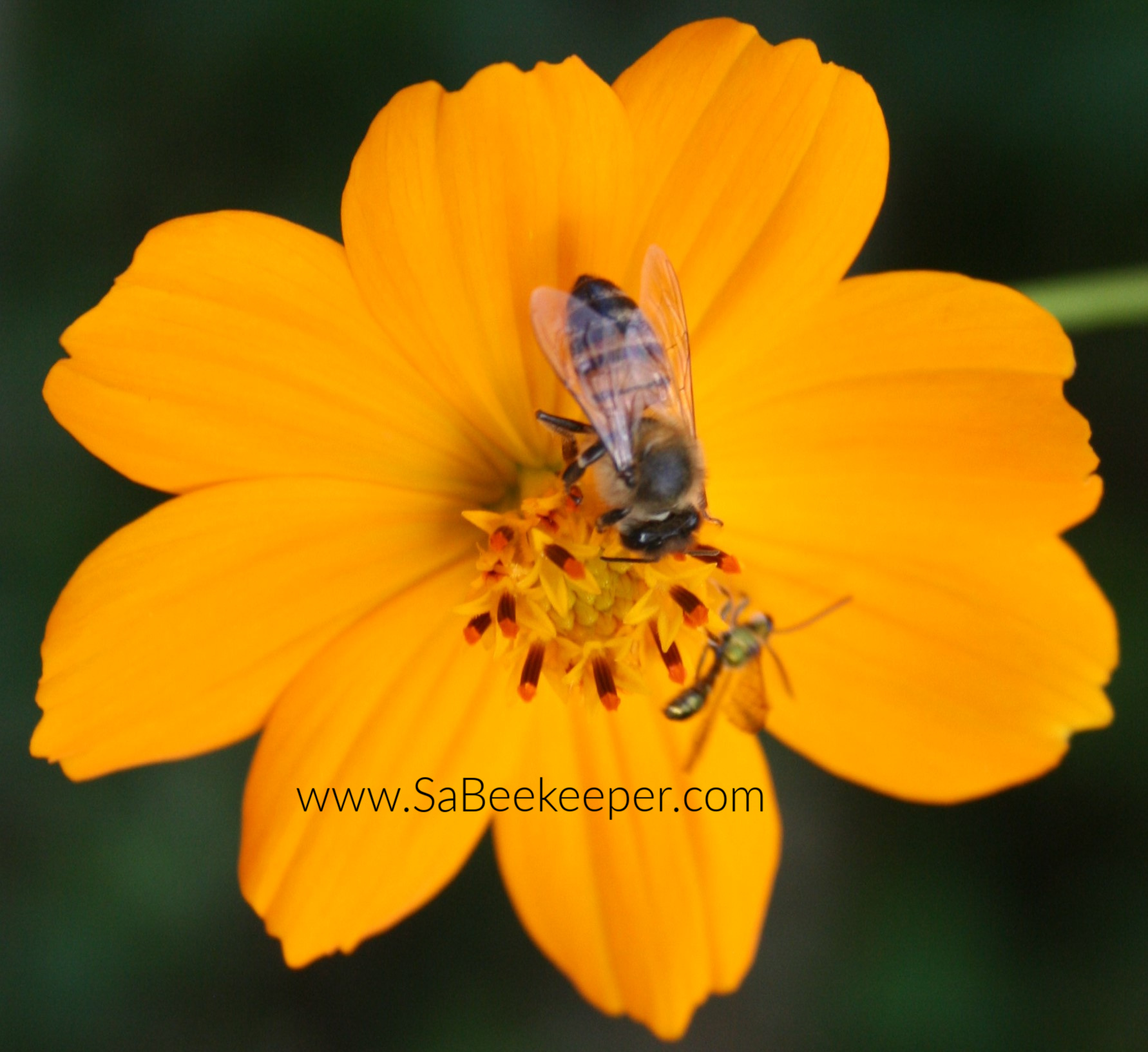 A Honey Bee and a Stingless Bee on the same flower. Very small bee compare to the honey bee.

The smaller bee watching as the honey bee leaves. 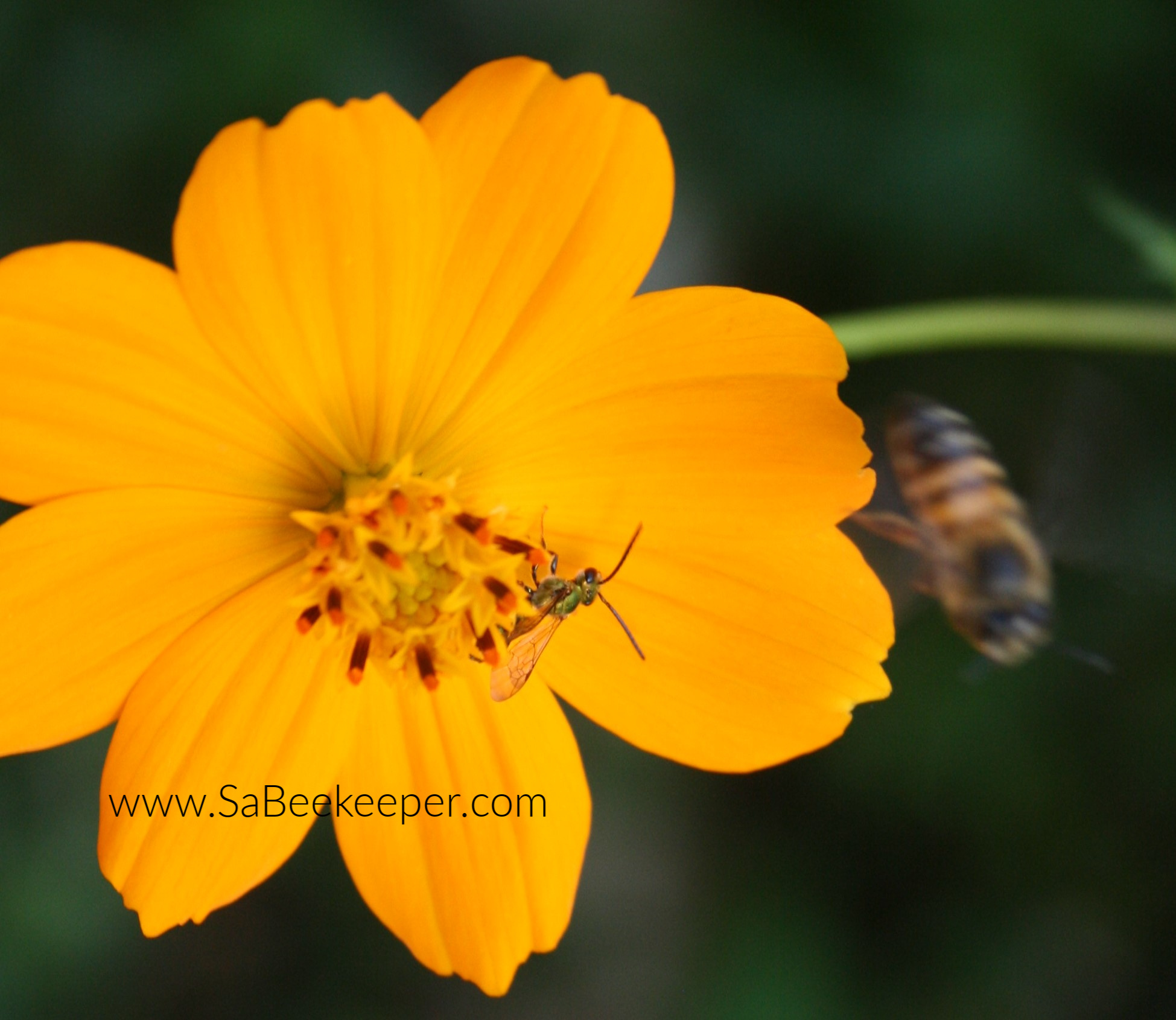 They say their honey is delicate flavor and is highly rated. The Stingless Bee is not as productive as the honey bee is.

One can imagine they not as productive as they so much smaller in size and would have to work three times harder to store honey in the same quantity as a honey bee.

You can obtain their honey without destroying their colony. As they store it at the outer edge of the nest. The perimeter. 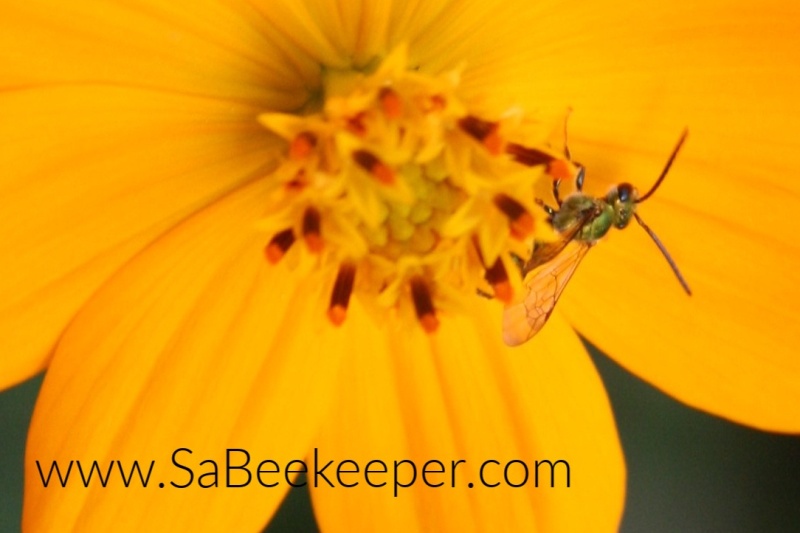 These bees often can take over or fight other bees colonies for their honey. They have very strong jaws,

which compensates for the lack of sting.

The bee will use its jaws to bite the jaws of the other bee, they fight to the death.

Jaws are their defense system that helps them enormously defend their honey supplies.

This fighting can take weeks and many bees die.

Once the war has been won, they depose of the queen bee and her workers and install their 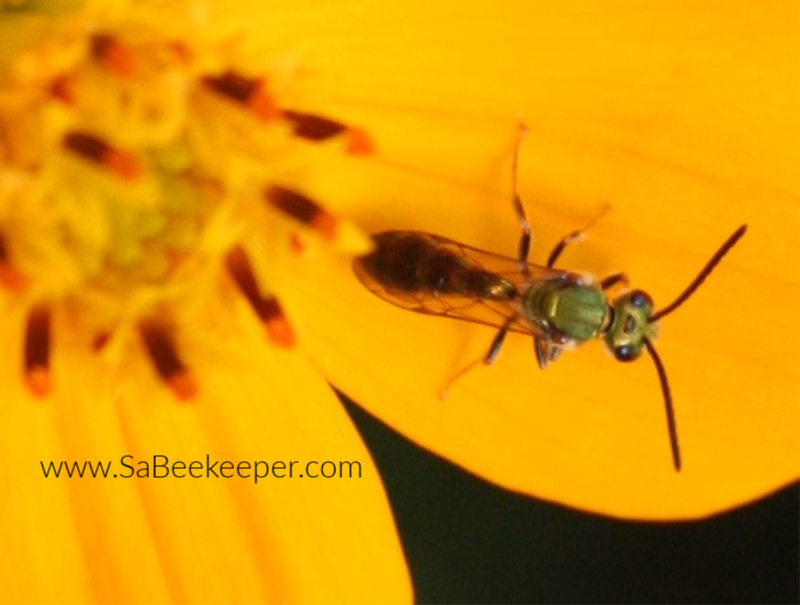