Often on walks this glistening blue green (Metallic)bee would hover in front of me. One was since found dead on the window sill in our house. They are quite fast and difficult to take a photo. As one is never prepared for the confrontation.

The orchard bee (Euglossa Dilemma) varies in colors, being seen as some times metallic glossy green to blue in color. 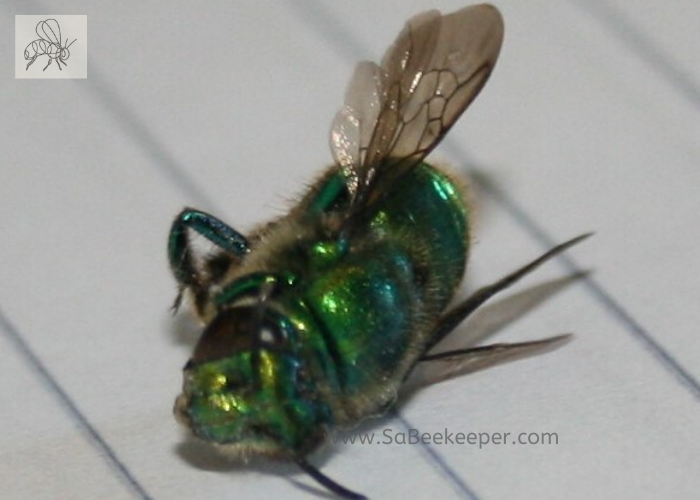 They grow to about 1.3 cm and their body is a little rounder than a normal bee. Abdomen is pointed at the tail end. 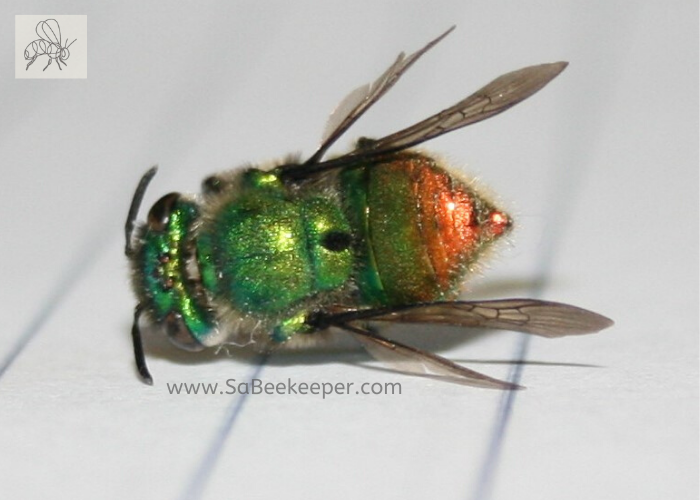 The wing membranes are dark but clear and females have pollen baskets on their legs. Whereas the male bee has an enlarged joint on his hind legs to store substances from plants in a pit like entrance. 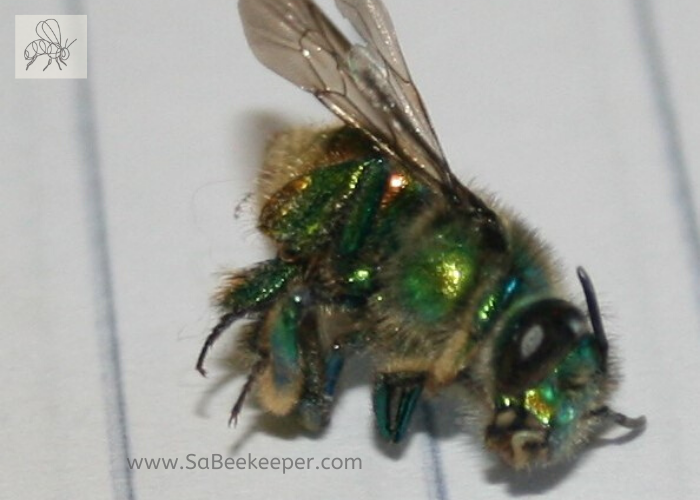 The female has a sting and can sting more that once, but will not die. The sting is not as bad as a honey bee.
She is very agile and hovers in the air, but darts between plants quit quickly. Orchid bees have very much longer proboscises in order to gather nectar from flowers with long corolla tubes.

The female bees build a solitary nest out of propolis, (propolis is made by the bee, with resins and saliva.)which can be made up of 20 cells. An egg is laid and she provides pollen and nectar for the larvae to eat. Then the larvae spins a cocoon and hibernates till spring until it emerges a full grown bee.

Several bees may build nests side by side but hey never share the duties of feeding each others larvae.

Body of a dead orchid bee.

Below picture is showing the pretty colorful bees metallic colors and the hairs on the body.
The large eyes on the side of the head and feelers. Also the hind legs that gather the pollen.

Orchid bees come in an amazing array of shapes and colors. You could call them the jewels of the bee kingdom.

They are great pollinators.

More posts about this bee.

Other types of orchid bees.

Orchid bees come in an amazing array of shapes and colors. There are big fuzzy black and yellow Eulaema, bright green Exaerete as long as your finger, and the brilliant, metallic Euglossa in shining blue, green, red, and gold.