Black Bumblebee on Sunflowers with facts of her life cycle. A friendly and photogenic black bumblebee was obtaining nectar and pollen.

Black Bumblbee on Sunflowers with Photos.

This black bumblebee has short fuzzy hairs on abdomen in stripes. This bee is
normally the size of about 3/4 inch to 1 1/2 inches big. It closely resembles the
Carpenter Bee in appearance. Except that a bumble bee does not buzz as load as the
Carpenter Bee. Also is not as large.

The BumbleBee has hairy legs with no pollen baskets. Dark membrane wings and
short faces as well as a more rounded abdomen.

Males have yellow on the face and females are totally black faced.

Life cycle of a bumblebee

How long they live.

Their length of life depends on the species of bumblebees They can live for about
2 to 6 weeks. You would find dead bees near their nests they were living in if you are lucky.

Bumblebees are excellent pollinators and more efficient than a honey bee. As they are large and heavier and more pollen clings to their fuzzy hairs on the bodies. Certain flowers need more stimulation to release the pollen and that’s when these larger bees become more popular.

Bumblebees have three different genders. The worker bee and the queen bee and the male bee.
Although the worker bumble bee is also female it is not as big as the queen bumble bee.
Queens and workers have similar coloration and physical features

The bee does not maintain colonies through the winter, on a number of queens survive and hibernate till spring.
The other bumblebee colony dies. In spring they start their colony again.

Bumblebees usually build their nests close to the ground or under piles of wood, dead leaves and compost piles. Even below ground in abandoned rodent tunnels.

They are very social bees and a group of bumble bees is called a colony. Which could be
between 50  to 500 individuals. They do not sting and die like a honey bee.

The bee eats nectar and pollen foraged from the flowers. The nectar provides energy.
Where as the pollen provides them with proteins. 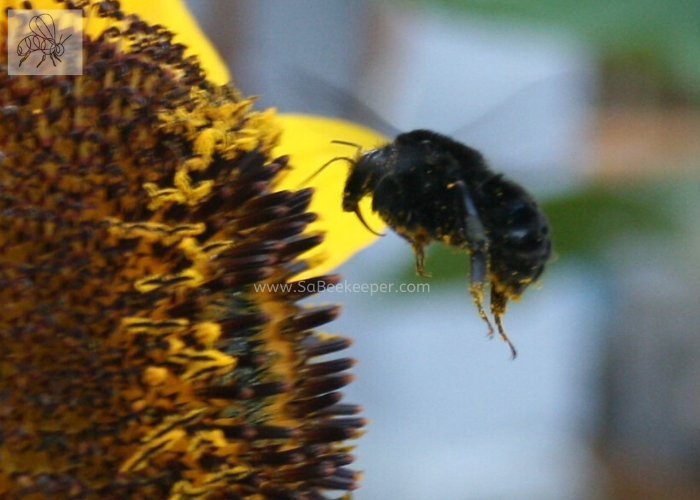 “According to The Bumblebee Conservation Trust. They make honey by chewing the pollen
and mixing it with their saliva, according to Animal Diversity Web (ADW). They feed the honey to the queen and the developing brood.”

The queen awakening from hibernation will start looking for food and a nest. Then she will
start laying eggs in her found nest, and storing pollen for her new offspring and herself.

The Queen will sit on the eggs for about two weeks keeping them warm. When they hatch
she will feed baby bees pollen. They are called larvae.
When they are two weeks old they will spin a cocoon and stay there till they are an adult Bee.
She will only look after the first batch of bees, so the newly hatched bumblebees are called workers.
They will take over the cleaning and guarding of the nest and providing food for the larvae.
The queen bee does nothing from then on but lay eggs and hatch them.

Bees born in late summer will be the male bumble bee, as well as future queen bees.
The male bees (drones) mate with the queens and then die. All that is left for the Queen
to do is fatten up and hibernate for the winter.

Bumblebees are larger than honey bees and generate more heat.
This allows them to work during cooler weather.

Bumblebees don’t die when they sting. This is trait found in honey bees.

Bees are covered in an oil that makes them waterproof.

Queens shiver to warm up and keep eggs toasty.

Bumblebees have a few species.

Many bumble bees are enlisted as endangered species.

A bumblebees life cycle and photos of her nest.