The Green Sweat Bee Pollinating Flowers. A few sweat bees were on the cosmos flowers, the life cycle and habits are explained with photos. 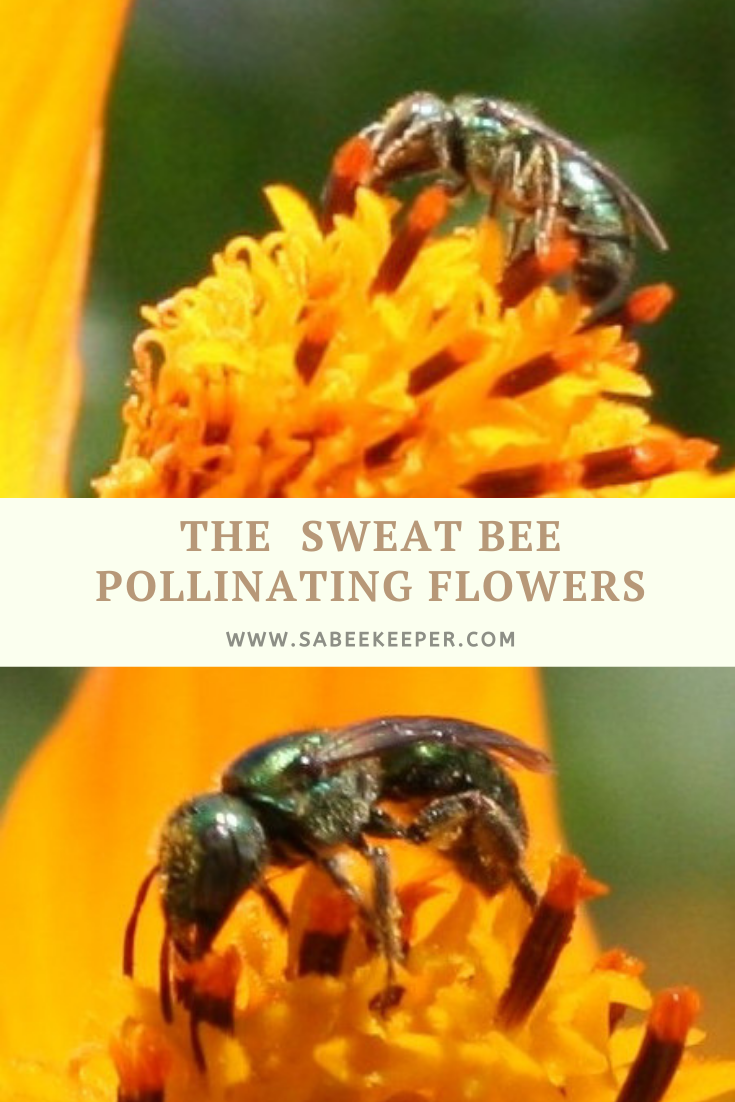 This tiny but beautiful metallic green sweat bee (Halictidae spp) was captured foraging for pollen on the cosmos flowers in the garden.

They are great pollinators of many types of flowers.

The sweat bee are small usually from 0,125 to 0.500 inches in length. The male bee in slenderer than the female bee.
Their small size may prevent many people from noticing their presence, or their habits and ways they breed. 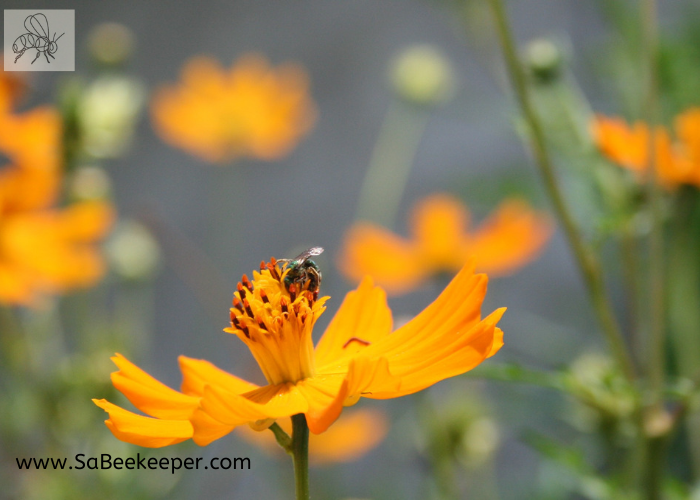 One does not have to have a garden full of flowers to attract bees, or have them pollinate. 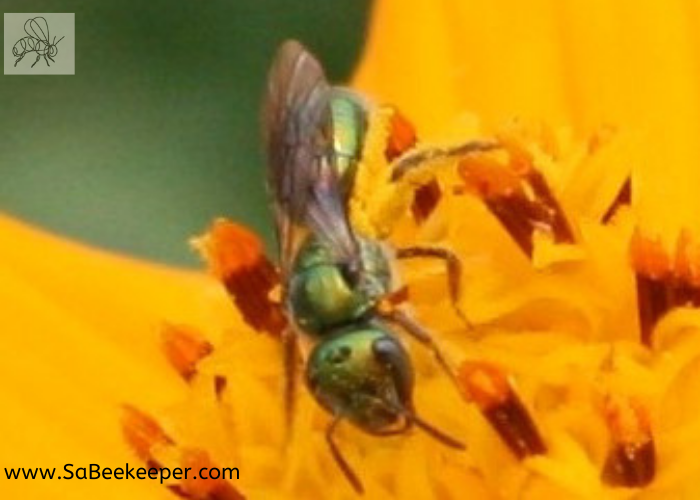 Note the colors of this metallic green tiny sweat bee, that collects pollen underneath the abdomen where they have light band of hair.
Other colors of sweat bees are blue bronze or metallic black/brown colors on their body. 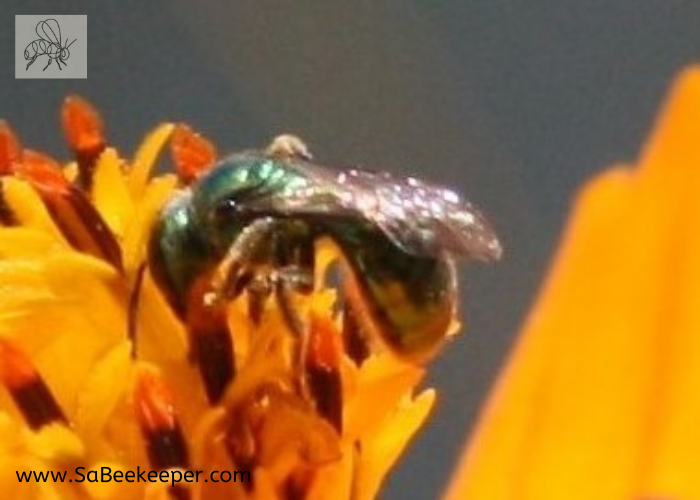 Glistening in the morning sun showing its lovely colors and seeks pollen and nectar. 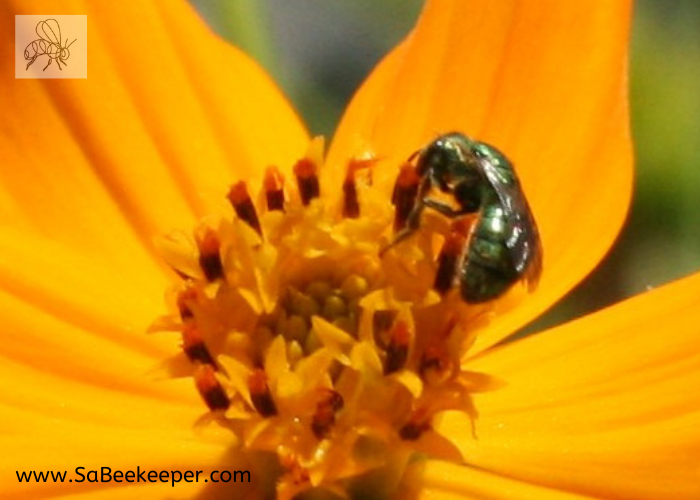 Another view of this small bee.

These bees may occur in large numbers but are not aggressive. They have short tongues to lap up the sweat,
which has earned them the name sweat bee.The bee will only sting if you squash its body against your skin.
Which will be the least painful of all stinging bees, because of the small size of the bee. 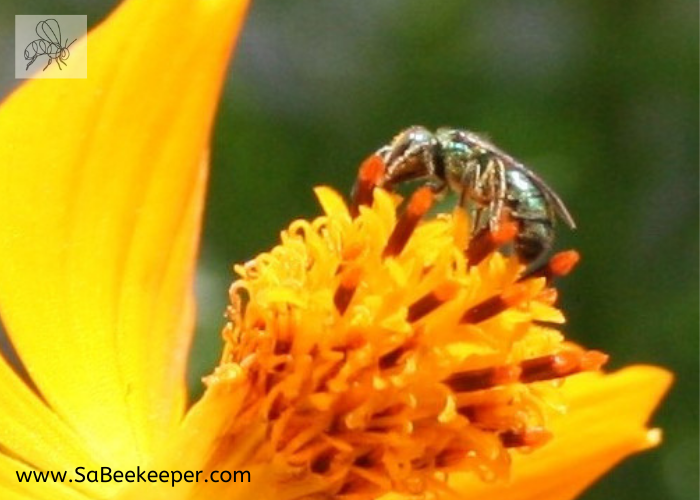 They will pollinate any type of flower and really are equal to other bees pollinating. Pollinating any native flowers in their areas they habitat.
Females may carry pollen on the back of the hind legs but males can not.
Sweat bees pollinate wildflowers and various crops, including stone fruits, alfalfa and sunflowers.
They are also known to have a more complex digestive system and detoxification system compare to other bees to handle the different types of pollen they collect. 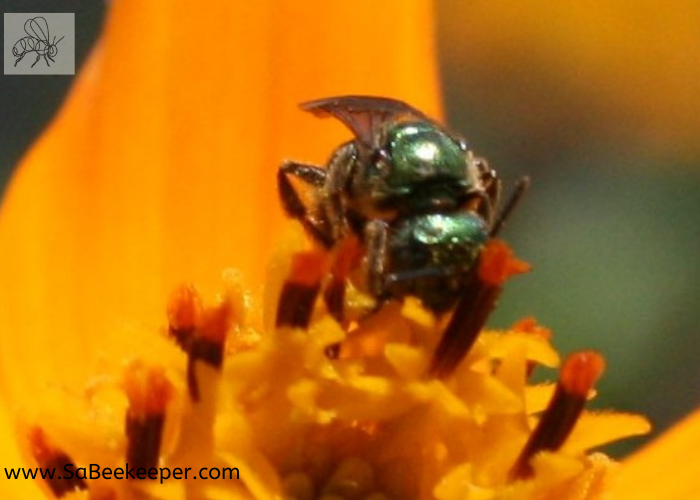 There are more than a thousand species of these bees and are found throughout the world.

These bees thrive in temperate regions but are widespread throughout the United States. 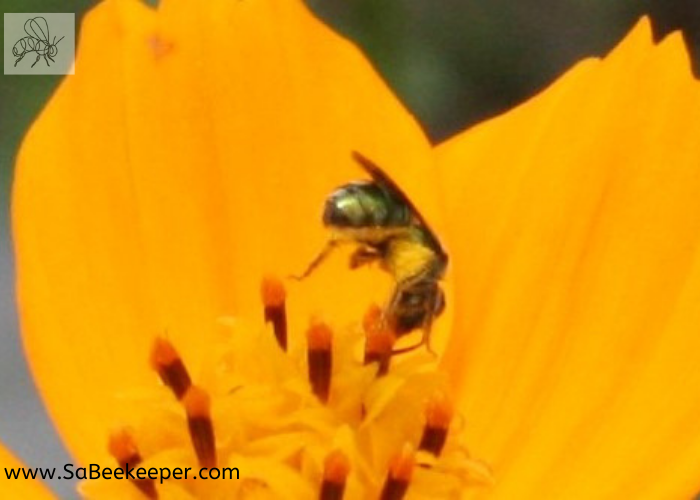 The sweat bee is a solitary bee or eusocial, but live in colonies with each bee performing a specific role.
They live underground and burrow holes below the soil. Solitary bees live in individual cells far from one another.

Where as eusocial bees, live in cells that are much closer to each other. but not in a hive like the honey bee.

In eusocial colonies, the mated female, known as a gyne, is the queen. She digs burrows underground and carves out cells, then fills each cell with pollen and places an egg inside. Eventually, the eggs turn into larvae and then pupae. Then the worker bees come out of the pupae stage. worker bees will emerge from these eggs. One worker bee guards the colony, while the others dig additional burrows and the queen returns to laying eggs.

Note the pollen on the lower half of the bee that has hairs to collect it. 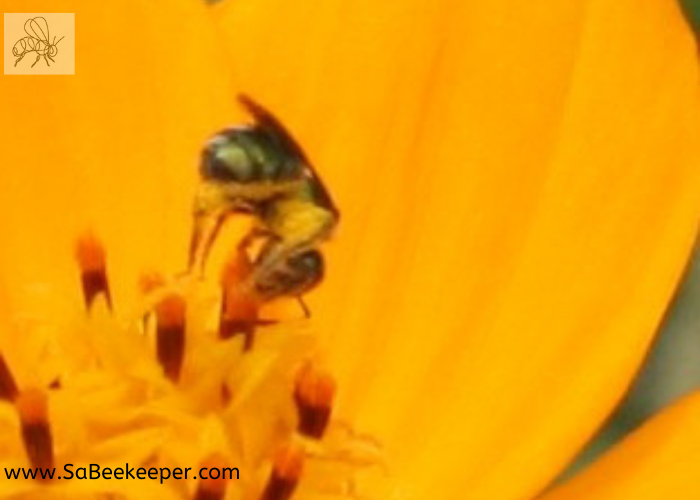 Sweat bees do not generally pose a threat to people, perhaps with the exception of hot summer days when they may seek out sweat to supplement their diets. See this on the below photo. 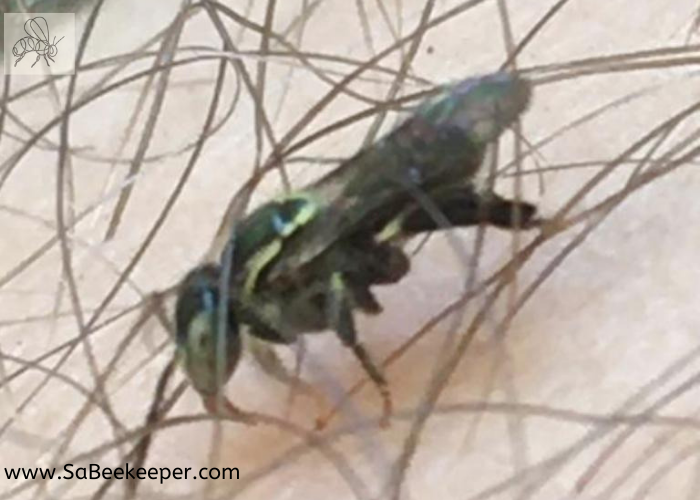 However, they can be a nuisance if they swarm in large numbers around your home. Still, it’s important to remember their critical role as pollinators and to allow them to perform their tasks undisturbed if possible. 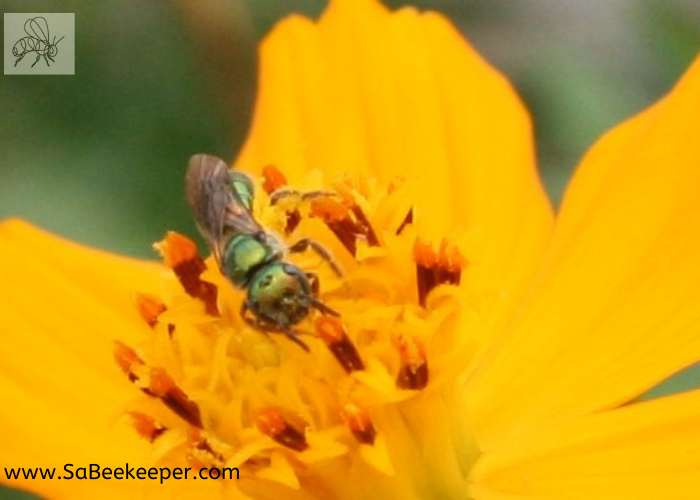 A pretty metallic green sweat bee and its shiny body. 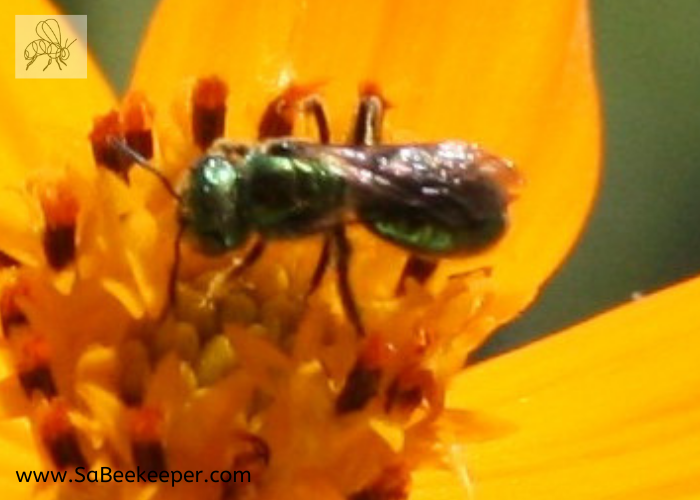 The picture show you the size of the honey bee and the tiny sweat bee, both on a flower together. 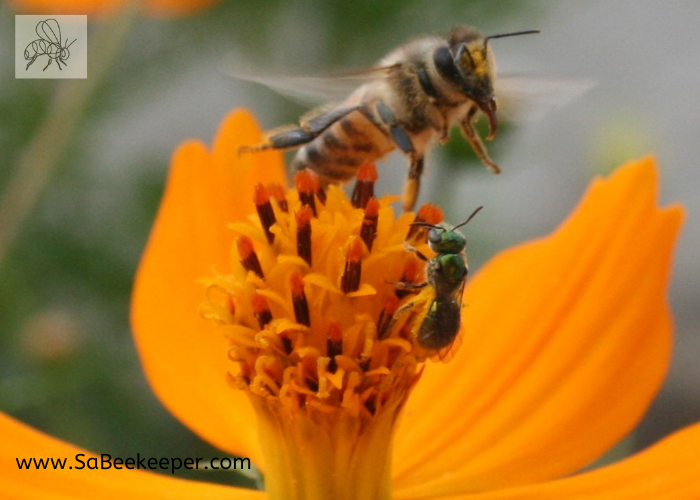 Additionally, because some species burrow underground and may fly a long distance, colonies can be difficult to track down.

But they are not a pest and do not sting if not squashed.
Another photo of a blue sweat bee, here.